Tamara, a wonderful viewer and lovely person made some very clever taco shells, and taco shell bowls from my tortilla base recipe. they are awesome, and we need to buy those taco bowl form pans immediately!

These can be made with or without cheese and used to fill with taco seasoned meat, shredded lettuce and othe toppings for an awesome taco salad! 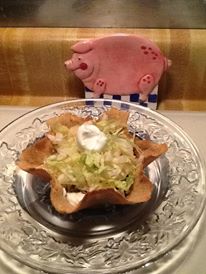