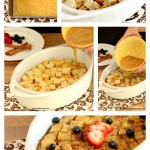 I served this vanilla cinnamon french toast casserole with a little maple syrup and garnished it with a few berries.  My whole family absolutely loved having this for breakfast.

The paleo and low-carb versions are both delicious. If you happen to already have your favorite paleo or low-carb bread available, then you could also use that for the bread cubes.

I did also include an easy, grain-free, quick bread recipe for you to use as well.

Those are not my hands in the pictures, they are cute elfin hands of my daughter. She does have very cute and tiny hands for a 25-year-old.

She did not enjoy doing this though and complained quite a bit. I guess hand modeling is not in her future.

I would have used my son’s hands, but he had icky stuff under his nails that would not come off, possibly a permanent marker.

Another low-carb breakfast or brunch recipe that is easy to prepare and great for the holidays is Bacon Spinach Tomato Ricotta Frittata.

Recipes you may also enjoy:

To find other delicious Low-Carb, Gluten-Free recipes, visit with us on Facebook!