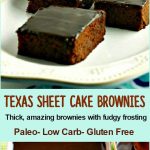 Mom's Texas Brownies, Grain-Free are adapted from my Mom’s brownie recipe, which is her favorite recipe. Texas Brownies were big, thick, cake-like, and had a fantastic chocolate frosting.

They are somewhat like chocolate cake brownies. My Mom gave me the recipe and asked me to give them a healthy makeover.

A tall order, since her recipe involved 2 cups white flour, and a whopping 3 ½ cups confectioner’s sugar in just the frosting alone!

It is a wonder I still have teeth after eating some of the treats I had as a kid.

I finally came up with an adaptation that is very close to the brownies I remember, only these ones have healthier ingredients and are grain-free, paleo, and have a low carb version for those of you who are counting your carbs or sugars.

There is brewed coffee in the recipe, but you can swap that with water if you can’t have coffee or decaf coffee, or if you don’t want that subtle flavor in there.

I find it does enhance the chocolate experience and it was in the original recipe.

You can decide if you want to use regular coffee, strong coffee, decaf coffee, or plain water. My son ate it and did not notice the coffee.

These are thick, so feel free to cut smaller portions than I did, if you like.  I cut into 12 portions but probably should have cut 16.

Mixing and preparing the brownie batter.

Mix and pour the chocolate ganache frosting over the brownies.

This post contains affiliate links. If you purchase through them, your cost will stay the same, but Beauty and the Foodie may receive remuneration or a small commission. Disclosure & Privacy Policy 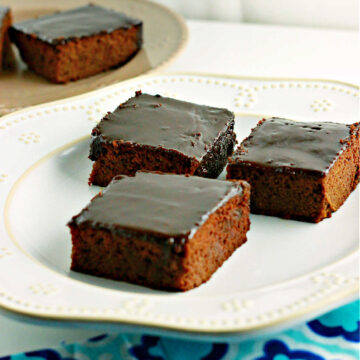