I used sunflower seed butter in this recipe, but you could use almond butter, peanut butter or other nut butters if you desire.

I added a chocolate drizzle to some of the brownies pops and left others with just the nut-free butter frosting.

These frosted paleo or low-carb brownie pops are perfect for parties, showers, and any little celebration.

These were fairly easy to make and my kids and hubby went nuts for them.

My Kids always love anything that resembles a lollipop.  I used a metal cake pop pan but you could also use a silicone cake pop pan, which also comes with the cake pop sticks.

The silicone pans were not out yet when I originally made this recipe, but I might need to give my cake pop pan to a donation center and get the silicon one.

The new silicone pans take up less space in my crowded kitchen cabinets.

I own this pan: the cake pop pan here: Cake Pop pan. 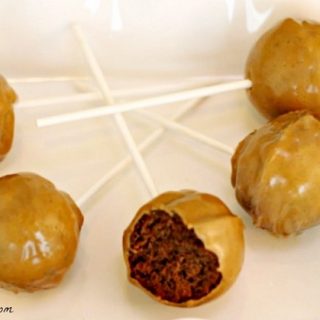