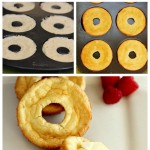 Low carb croissant bagels are grain free and primal. A marriage of a buttery croissant and a sturdy bagel.

These are an adaptation of the Revolution Roll recipe in Dr. Atkin"s Diet Revolution (1972). I like the recipe in the book but wanted to make the rolls more sturdy and less delicate.

I added butter for a croissant-like flavor, and coconut flour to make it denser. Just not as dense as my coconut flour bagel experiment.

That one could have been used as a doorstop, lol. I was trying to get somewhere in between delicate and brick. Awe, the joys of grain-free baking!

The kids said it does taste like a croissant but without the flakiness. I'm happy with that review. Definitely closer to a croissant than a bagel.

However, the kids were sad when They found out I was not making donuts. They saw the donut pan out and got excited.

This is where I bought the bagel donut pan: Bagel Pan 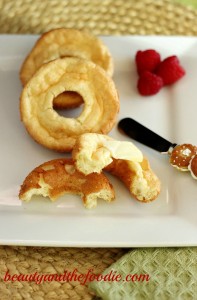