These Paleo German Chocolate Brownies are gluten-free with a low-carb version.

Paleo German Chocolate Brownies evolved from my husband’s love for German chocolate cake, which strangely enough is actually not from Germany at all.

So don’t try to order it in a German restaurant because it won’t be on the menu.

The cake actually traces back to 1852 when an American named Sam German developed a type of dark baking chocolate for the Baker’s Chocolate Company.

And so, somehow the cake was named after his German’s dark baker's chocolate.

I wanted to make a paleo version and a low carb version, but I did not want to make an entire 2 layer cake.

So I decided to make a German chocolate layered brownie. And I’m so glad I did because this is a new favorite recipe of mine now.

The kids and the Hubby went completely bonkers for it.

First layer is the brownie batter.

Drizzle with chocolate sauce and serve. 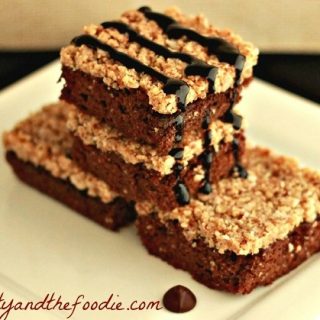