Paleo Peach Chia Mini Pies are a delicious way to add chia seeds to your diet. One of the best things that can happen to your mouth, is eating a ripe peach. Especially if it's in a pie.

I found some amazing, ripe peaches at the farmer's market.

I purchased a bag full for eating and baking. If you don't have access to ripe peaches,  then you could defrost some frozen, organic peaches for this recipe.

The frozen peach slices work well in this recipe too.

These mini pies have a low-carb version depending on which sweetener of choice is used.

I made my grain-free, nut-free pie crust and filled it with an awesome peach filling.

Why do I always make mini pies or tarts instead of whole pies or tarts?  I make them because it gives me better portion control.  Okay, it's actually because I get more pie crust per bite, lol.

You may use a mini tart pan, but I used a muffin pan.

I should get a lovely tart pan. The photo below is the pie crust that I pressed and smashed in the pan with my fingers. The next photo is the crust with the peach filling. 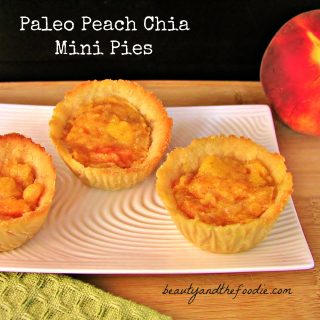